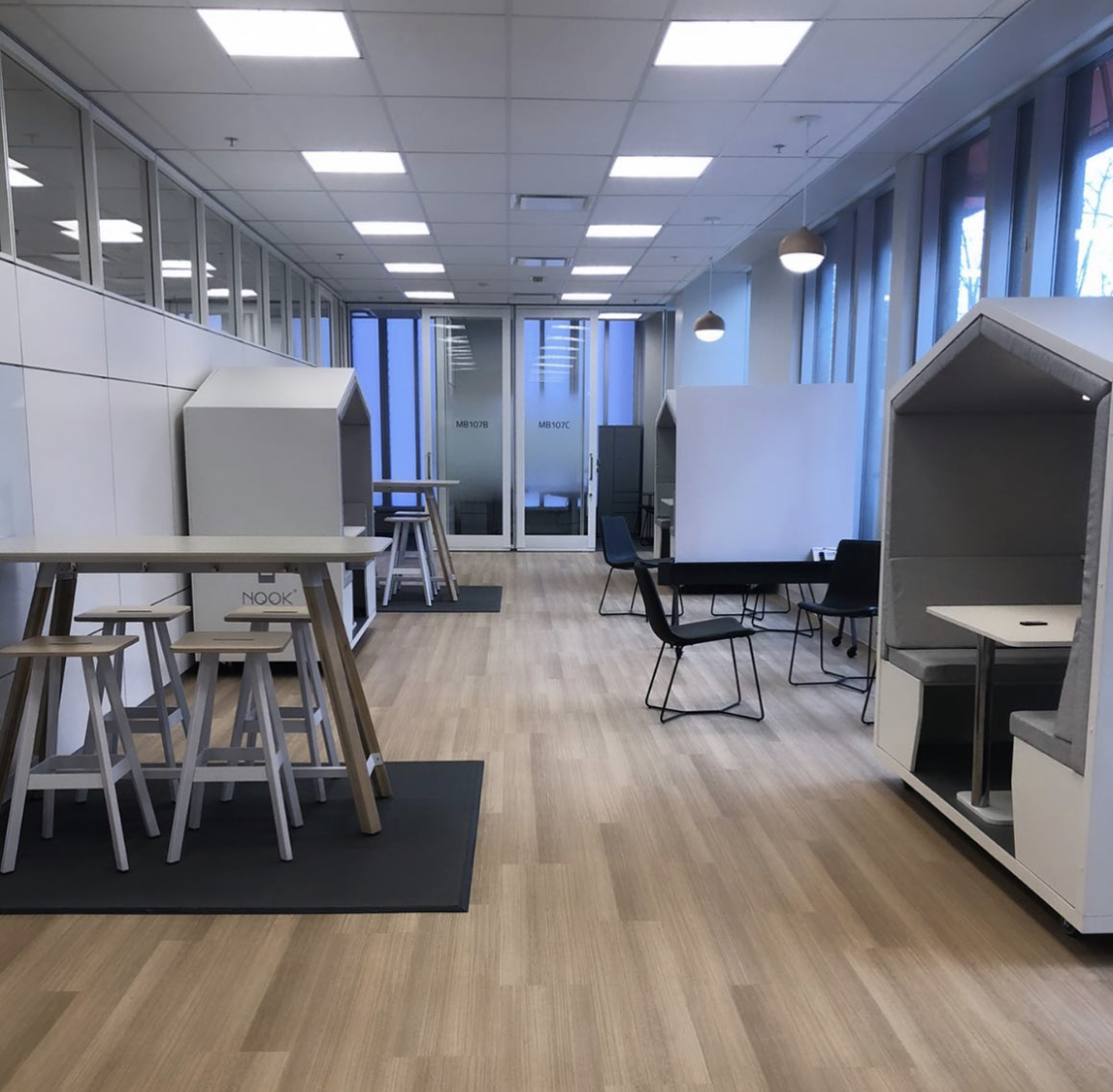 We recently took part in a lively round-table discussion hosted by Great British Entrepreneur Awards and haysmacintyre on the topic of the future of office space post-Covid.

Nook was joined by other innovative brands from the world of workspace and beyond, and the discussion delivered some great insight into the challenges ahead for businesses and the role that the workspace sector will play in the new world of work.

These challenges include how to engage with a globally dispersed, remote-first workforce, and how to successfully implement wellbeing strategies – a key requirement for employees as they return to office space.

You’ll find a full write-up of the discussion below and you can find the original post from Great British Entrepreneur Awards  here. 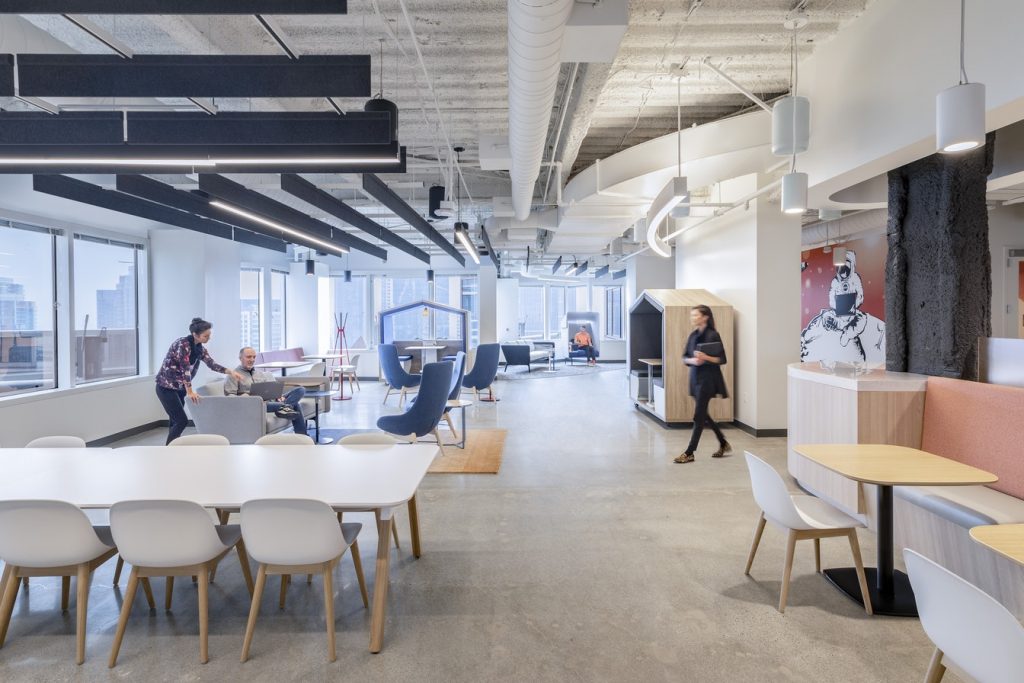 The future of office space post-Covid

What does the future of working look like? It’s a question that employers and employees have been asking since last summer when it became evident that the Covid-19 pandemic was sticking around for more than a few months.

With more people working from home than ever before, some loved it – large corporations even announced plans to ditch their offices entirely, or opt for a more flexible approach. Others, however, struggled with the isolation of it all and to collaborate creatively and effectively.

It was the topic of discussion at a recent roundtable of entrepreneurs hosted by the Great British Entrepreneur Awards and haysmacintyre. And taking place the morning after Boris Johnson revealed his ‘roadmap’ to get England out of lockdown restrictions, the conversation perhaps held greater importance with the realisation that employers now have a timeline by which to make their post-Covid plans for office space.

Jake Pearlman, senior manager at haysmacintyre, said “Everyone has differing views regarding the future of office space, but it was really positive hearing how the entrepreneurs who joined us envisage the future. It was great to hear how co-working, technology and wellness all have such a large part to play in the future office environment with companies putting employees first, with a flexible approach being fundamental to future success.” 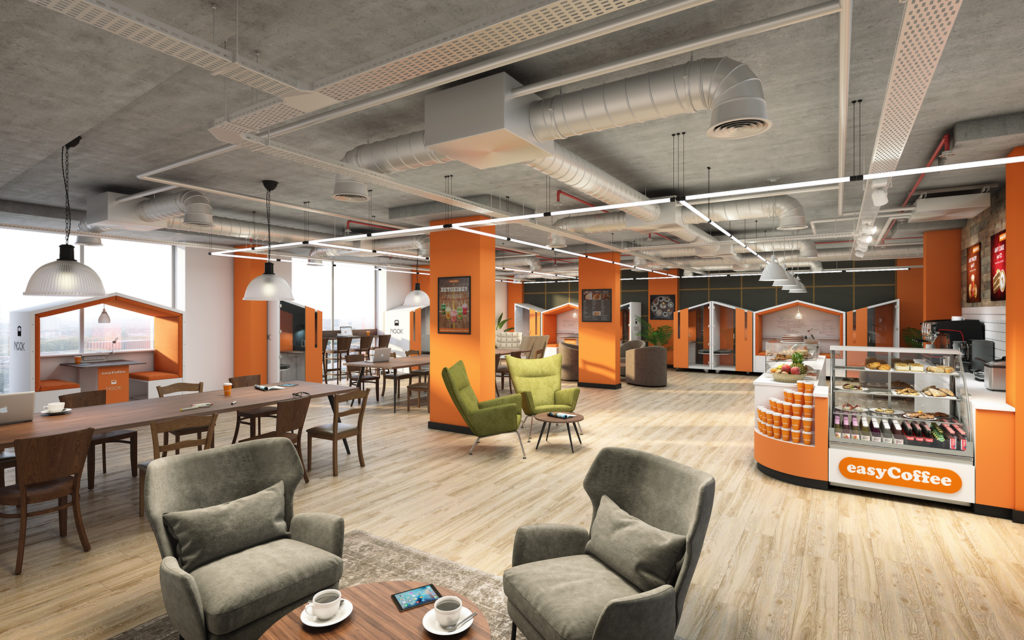 The rise of co-working

Starting the discussion, Paul Holbrook, founder of Diary Detox, argued that the pandemic has caused a blurring of lines between the concept of home working and flexible working.

“This isn’t working from home, really,” he said. “Before the pandemic, home working wasn’t being forced to stay in your home with your entire family in close proximity for 12 hours a day, doing your job and never getting a break.”

Understandably, Paul highlighted that it has led to somewhat of a backlash against working from home where plenty of workers are pleading to return to the office when restrictions are lifted.

Paul added: “I want people to stop focusing on the term ‘from home’ and focus on ‘flexible’. It doesn’t have to be one or the other, there are other options beside working from an office all the time and working from home all the time.”

In the short-term, he believes people will return to the office because they want to get away from the pandemic version of working from home, but in the long-term he hopes “people will realise that this is about having a choice, and that there will be a surge in coworking”.

Tom Ball, founder of DeskLodge, stressed that with an estimated 96% of office space that is non-flexible, there will be a huge imbalance with teams that want to work in different ways. And businesses need to figure out how they’re going to build and maintain suitable working structures, processes and cultures.

David O’Coimin, founder of Nook Pods, explained that he is seeing an explosion of coworking aggregators; platforms that help people find and book coworking spaces.

David explained: “Some of the biggest organisations are buying credits with these aggregators that allow their employees to work near their homes, so they can have the benefit of a working environment with other people but without longer commutes.

“And then an intelligence layer comes on top of that, where workers can find their colleagues within those spaces. And that’s all going to drive change.” 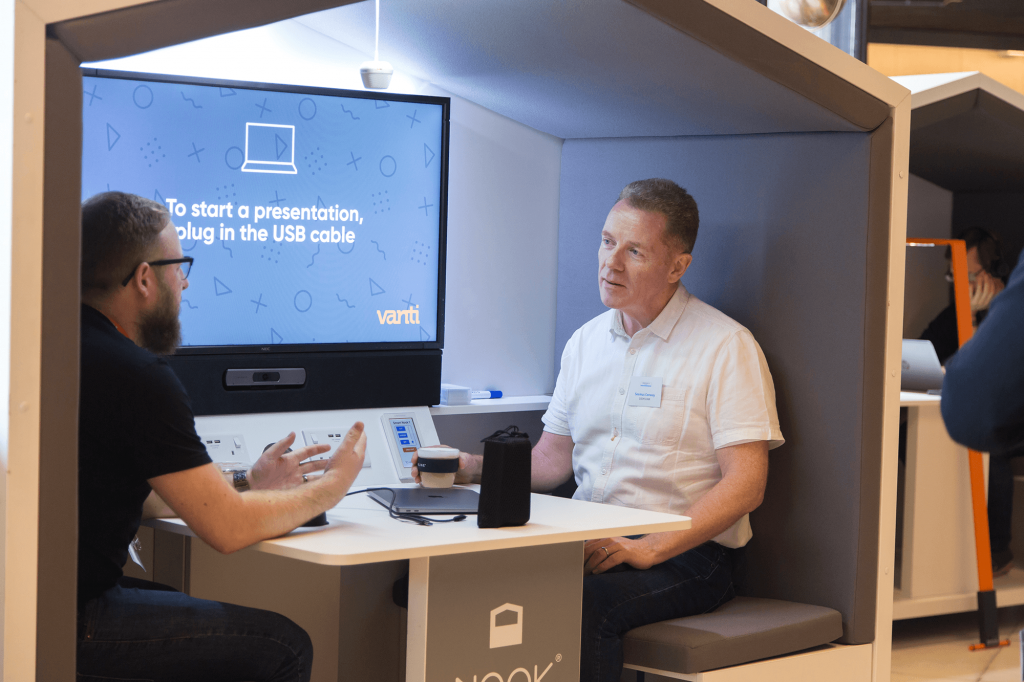 Breaking out of the city

With the apparent trend of workers wanting an office environment closer to home, the attention now turns to how they can access those coworking spaces, when, while there are exceptions, they are more commonly found in big city centres, rather than smaller towns or out-of-town locations.

Dominic Ponniah of commercial cleaning company Cleanology said he’s seeing a number of clients ditch their offices in favour of coworking spaces outside of central London.

He said: “The number of firms that have left their offices and are currently without one is extraordinary.

“We’ve started to target coworking spaces as potential clients because that’s the growth area moving forward. We’re seeing clients move to outer London and into coworking spaces. The occupancy levels of some of our client’s offices [in central London] has been between 10 and 20%.”

Rishi Chowdhury, founder of Incube, suggested that there is both the opportunity and appetite to turn the challenges facing the High Street into something positive for the future of working.

“There’s a lot of interest among landlords with retail, or council-owned spaces, in repurposing underutilised or empty spaces into coworking spaces,” he said.

“I don’t think there are many great options in many of the smaller towns outside the larger cities. As more and more flexible workspaces that can meet different needs become available for people to work in local towns, there will be an increase in the number of people that see them as a viable alternative to working at home or commuting to HQ.”

Gareth Jones, founder of Town Square Spaces, has launched a handful of coworking hubs in smaller towns in the UK, but warned that despite the number of people working from home over the past year, there may still be an awareness issue preventing a surge in coworking post-pandemic.

With the Institute of Directors showing that 40% of company bosses wanting to see a shift to coworking, Gareth stressed that the coworking and office industry needs to make it easy for employers to adopt it. 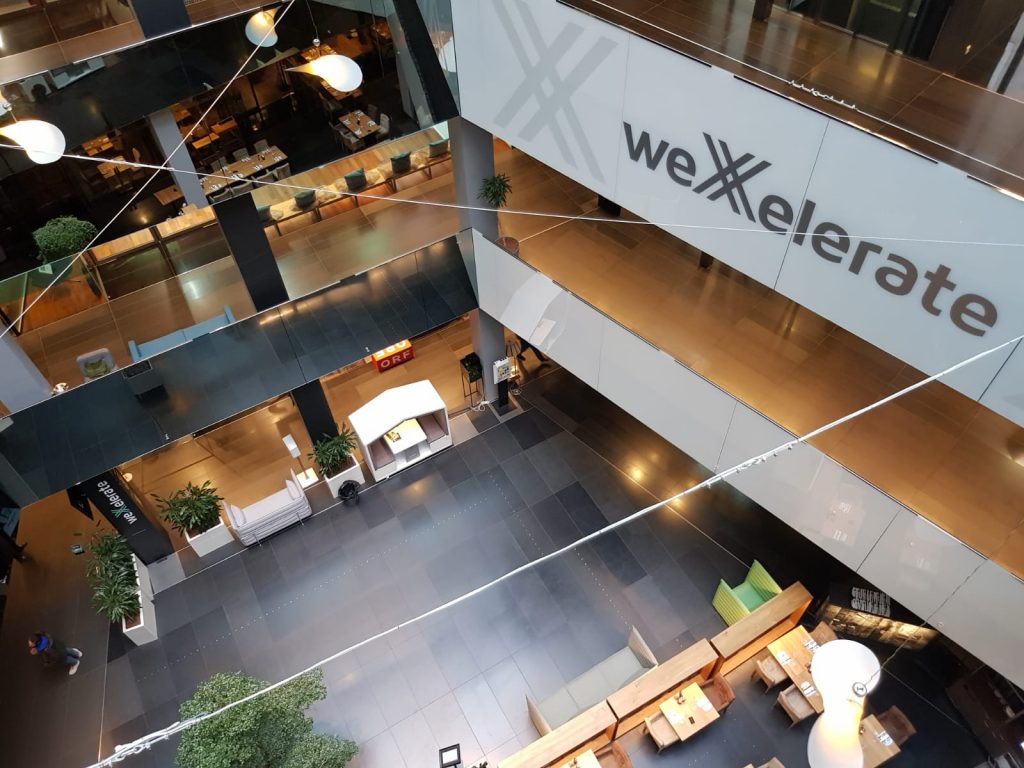 David Barker, founder of Techcentre, was quick to point out the benefits that employers stand to experience from a talent and recruitment point of view if they adopt a more flexible approach to working and the workspace.

“When I started my last business, I started in London and grew to 16 staff quickly, but I knew we were going to grow to well over 200 staff within 12 months and I was determined to break the Canary Wharf effect,” he explained.

He set up offices around the country and was able to increase staff growth even further because the cost per square foot was lower and freed up more funding for salaries.

“It allows you to diversify the cognitive capabilities of your workforce,” David added.

“Empowering the employees to choose how they want to work helps them to configure workflow around their projects. That’s the key. Let’s design processes around operations and projects rather than general workplaces. That’s what we really need to sell to businesses.” 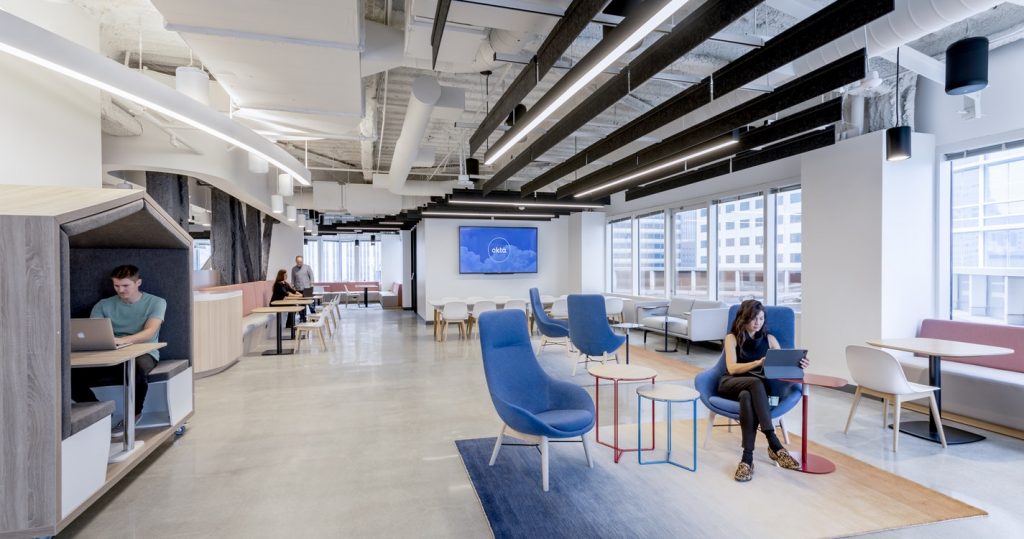 Jo Dalton, founder of JD & Co, highlighted the opportunity for a new leadership position across industries with this new way of working. Specialising in executive recruitment, she explained that she is seeing more and more businesses, including the likes of Facebook, creating a new leadership role focused on remote working.

“They’re all talking about digital nomads, with employees working from everywhere,” she said. “But the culture problem is going to be absolutely massive – how you engage with that globally dispersed, remote-first workforce.”

Some bosses who have been skeptical about home or remote working have raised concerns about productivity and being able to ensure their workers are actually working. But employers need to trust their workers for the future to work.

“One of our clients was shocked that some leaders were looking into monitoring software that could keep an eye on their staff to make sure they were at their desk, working 9-5,” Jo said.

“For this flexible future to work, staff have to be able to work wherever they want, whenever they can. It’s got to be about output and impact not hours. And that’s how the best companies of the future are going to attract the best talent.”

Paul Holbrook pointed out that if managers and directors are concerned about trusting staff when they’re working from home, a coworking space or elsewhere, the problem isn’t with flexible working. The problem is with the managers. 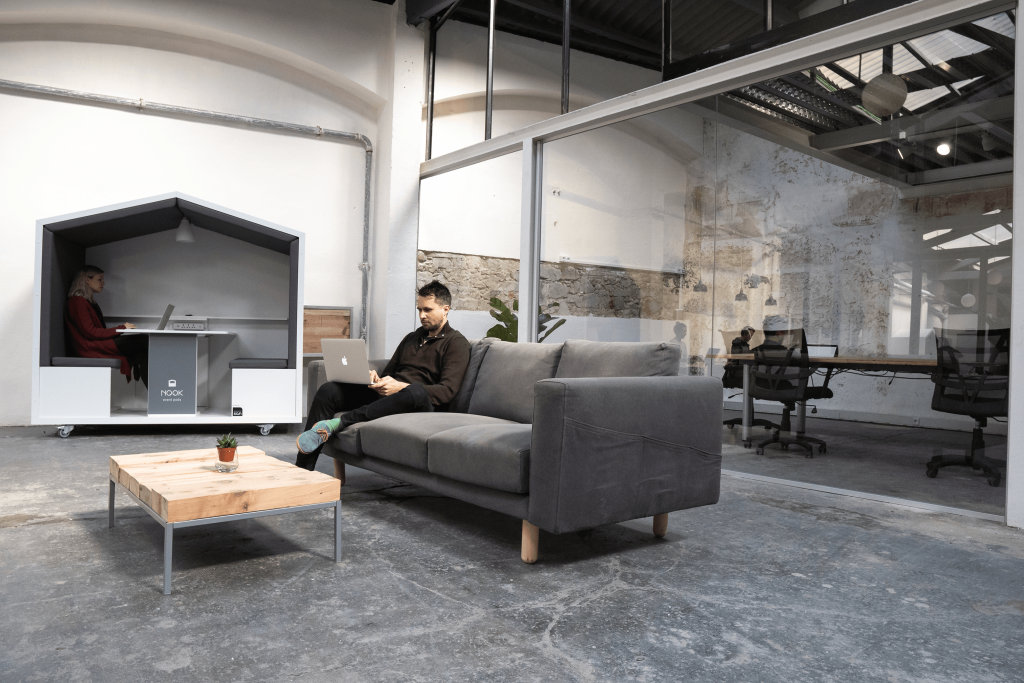 Wellbeing in the workplace

With so much focus having rightly been centred around workplace wellbeing in recent years, some entrepreneurs and managers have struggled to determine exactly how they implement wellbeing strategies that exist outside of a single, centralised office space.

Simon Scott-Nelson, founder of Wellity, said: “None of us have been here before. This is going to be a step-by-step learning for us all.”

He stressed the importance of letting employees steer the direction because “everyone has effectively been the CEO of their own working environment for the past year”. He highlighted the importance of community within a business as a key factor in driving a culture of wellbeing.

Simon said: “Community isn’t built within brick and mortar offices. Communities are dispersed in organisational culture, and that’s what we’ve got to work on. Some businesses are only just sending out questionnaires to find out how staff are coping, how they’re working, how they want to work in the future. They’re six months too late for that. We have to engage with staff, wherever they are.”

Perhaps an unspoken challenge facing organisations as they move to coworking and remote working is how they keep their staff safe.

Shazia Mustafa, founder of Third Door, revealed that she was once asked by a reporter if there had ever been any unsavoury behaviour towards female users of her coworking space, largely because they had heard of it happening in another space and the issue wasn’t dealt with.

And while Shazia was pleased to report that no issue had ever occurred at Third Door, it did raise an important consideration for employers.

“The problem is that the people at coworking spaces aren’t employees, they’re customers,” she said. “There has to be policies in place to make sure that all staff are safe and welcoming, regardless of gender or age.”

Gareth Jones explained that any business or individual using Town Square Spaces must sign up to its charter.

He said: “I think there’s an interesting challenge if we do move towards an aggregator model, because how do we stop them at the door and ask them to sign our charter? How does a business operating in Barnstaple register a member of staff to a coworking space in Devon and sign up to that charter in Devon?”

David O’Coimin added: “This change moment has also led to greater inclusivity in some important ways. The new hybrid working arrangements need to embrace that inclusivity as a key way to ensure greater equity, mental health and engagement.” 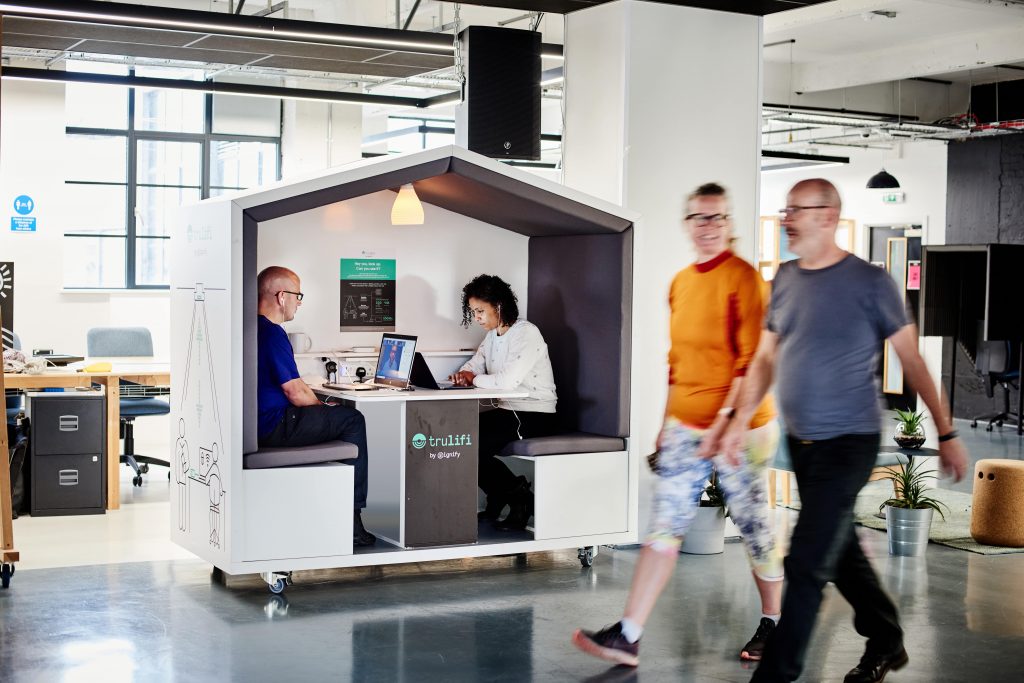 While there are definitely challenges and uncertainties facing businesses as they approach a new way of working post-pandemic, the group appeared fairly unanimous in its expectation that coworking will be front and centre – offering a middle ground between a full-time traditional office environment and the flexibility that people have experienced working from home over the past year or so.

Finishing the discussion, David articulated it nicely: “I really believe there’s a huge role for coworking in setting the tone for the corporate way of working for decades ahead.”